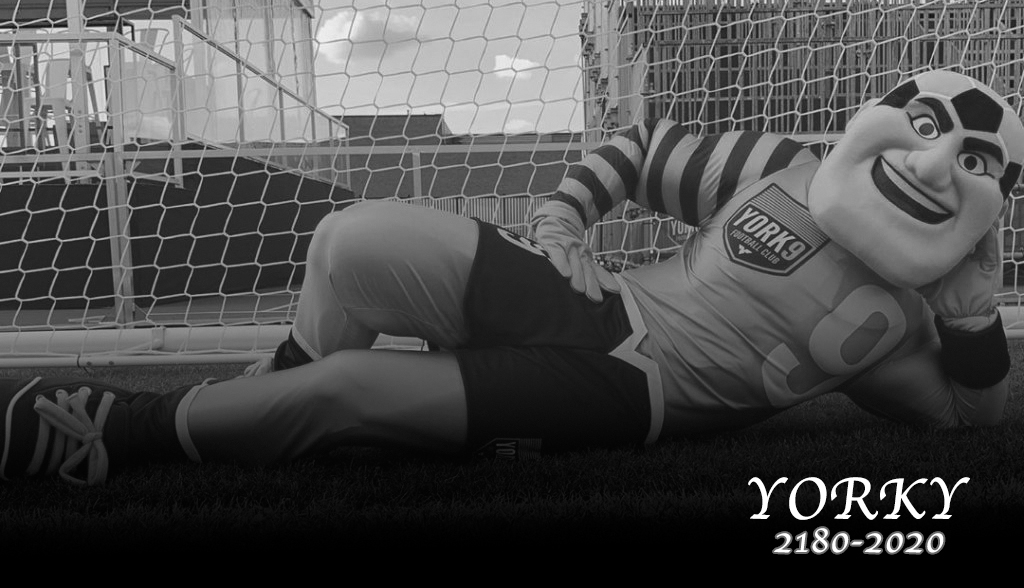 Friends. Family. Fans wearing cardboard alien masks. We are gathered here to celebrate the long (looooong) life and passing of our beloved and too-soon-removed mascot friend, Yorky Yorknineovic, who passed away in a tragic time-and-space travel accident at the tender age of, like, 240.

Yorky was many things to many people: a courageous champion of all things soccer in York Region; a marvel of future technology and artificial intelligence, sent back in time to flex on all of us the sort of grace and style that would make Dr. Emmett Brown proud; and, of course, a strange-headed green mascot who appeared at York9 FC games in the inaugural Canadian Premier League season.

But, most importantly, he was a friend of the people of York.

On a cold, bone-chilling Friday in York Region, York9 FC announced the passing of Yorky the mascot by way of a time-travel-induced ret-conning of an infamous scene from The Simpsons.

Yorky’s death will send shockwaves across the league, to be sure, but his story will not be forgotten.

Yorky was an artificial android footballer who travelled back in time from the year 2219 by ripping a hole through the space-time continuum via free kick.

He was born and raised in York Region, which in the future is still made up of thriving communities of soccer supporters. In 2219, Yorky captained York9 to many, many victories and trophies, but to keep his future on track, Yorky had to travel back in time to “be the team’s ultimate driving force of victory.”

Unfortunately, with a third-place finish in 2019, Yorky’s mission was classified as a failure and he was “executed by the high council of the Federation of Intergalactic Football Associations (FIFA)” upon his return to his home planet (?).

Yorky was described as a “cerebral player” during his playing days. Yorky said he could “play in the eleven positions because a good player can play anywhere” but would also be proud to proclaim that he was always there to get a head on the ball when required, regardless of position.

He was a fan of the oldies like Drake and The Weeknd, and his favourite movie was YORKY II: The Yorkening or Die Hard 9: Just Die Already.

He may be gone – York9 confirmed to CanPL.ca, definitively – but he will not be forgotten (even by Valour).

Rest in pieces, you beautiful bot.