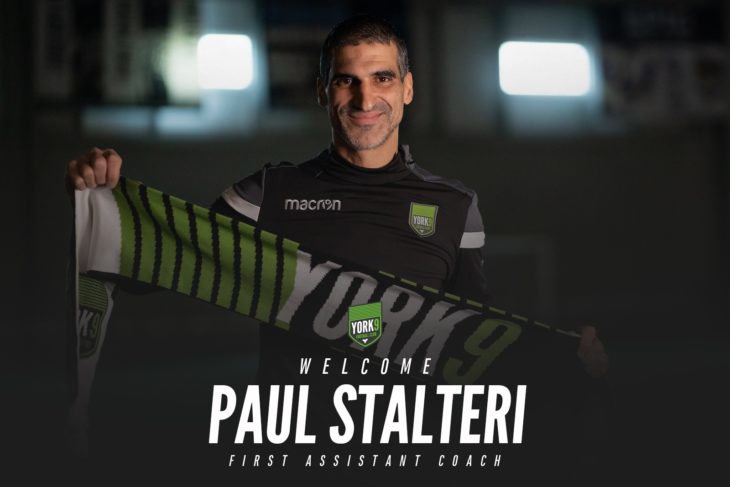 Toronto, ON (February 4, 2020) – Jimmy Brennan has strengthened his backroom team with the appointment of fellow Canada Soccer Hall of Famer, Paul Stalteri, as his First Assistant Coach.

The 42-year-old joins York9 FC from Canada Soccer, after spending the majority of his playing career in Europe, where he represented Werder Bremen, Tottenham Hotspur, Fulham and Borussia Mönchengladbach.

He started out at Toronto Lynx – while he studied at York University – and at the time of his retirement in 2013, Stalteri held the record for the most caps for Canada Men’s National Team with 84, having progressed through the national team ranks from U-17 to U-23 during the nineties to make his senior Canada MNT debut in 1997.

Six months after winning the CONCACAF Gold Cup in 2000, Stalteri netted on his Bundesliga debut, becoming the first Canadian to score in the German top division. He went on to make more than 150 appearances for Werder Bremen and won the Bundesliga and DFB-Pokal double in 2003/04.

Since hanging up his boots, the Brampton native has been working across the age groups in the national set-up, coaching youngsters who may well go on to become stars of the CPL in the seasons ahead.

“This is a great opportunity to build this club into something very special,” explained the double-Canadian Player of the Year.

“We grew up playing together so I’ve known Jimmy for more than 25 years. We’ve kept in close contact throughout that time, and it was just after Christmas that we started to speak in more serious terms on what role I could play and bring to the team, and what he’d like [to achieve].

“I live in the area so it makes a lot of sense on my side and from the club’s perspective. Knowing Jimmy for a long time also makes the decision to work together easier; we have a similar philosophy on how the game should be played and how we want this club to move forward.

“When I first got back from Europe, I was pretty much straight into the role with Canada Soccer, working with all the different levels there from U-15 upwards. It was an excellent grounding at the start of my coaching career, and I finished off working with the men’s team.

“I’m looking forward to getting into it [at a club level now], and the serious part of the preseason, which is coming up very shortly.”

Head coach Brennan added: “I wanted to get Paul in from day one; he’s got a great deal of experience, but he was with the national team at the time so we’ve had to be patient.

“I am pleased that we’ve been able to get him on board now. He’s a professional who has played at the highest level and it’s a great opportunity for the players here to be able to utilize his vast knowledge.

“We’re all looking forward to working with him.”