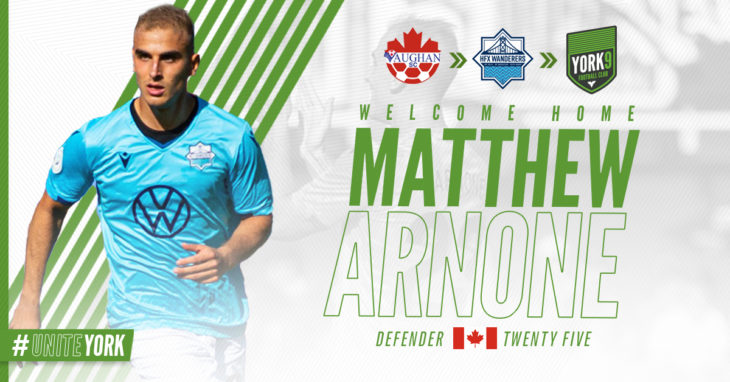 Toronto, ON (February 18, 2020) – Local boy Matthew Arnone is back in the municipality as York9 FC’s sixth new signing.

Arnone was a key part of the dominant Vaughan Azzurri team that won the 2018 league and cup double in League1 Ontario. Before that, the 6-foot, 2-inch defender attended York University, where he made a total of 70 appearances for the Lions and netted five goals.

“I am truly thankful for the opportunity to come and play in my hometown,” Arnone, who played 86 percent of the available minutes for the Wanderers last year, said. “To wear the crest and colours of York region is something I will do with pride.

“I am very excited to do something special with this group, with the talent on this squad the expectation is not just to compete, but win trophies, and I can’t wait to be a part of it.”

Head coach Jimmy Brennan added: “Arnone is a great fit for us. We’re bringing in another local boy with some experience in this league like Michael Petrasso, and in a position we wanted to reinforce.

“He’s got a good presence, and he’s played midfield before, so he’s good with the ball at his feet. It matches up with the way we want to play. Our centre-backs have to be able to play out the back and have a good touch. He’s just the right player for us.”