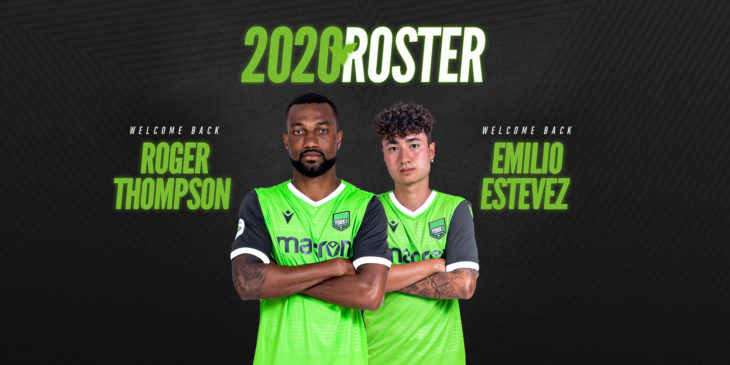 Toronto, ON (December 10, 2019) – Midfielder Emilio Estevez and defender Roger Thompson will return to York9 FC roster for the 2020 season.

“Roger and Emilio are going to be huge parts of next season,” said York9 FC Head Coach, Jimmy Brennan.  “Emilio is a kid that caught my attention the second I saw him at the #GotGame Open Trials in 2018. He’s got so much talent and I’m really looking forward to helping him develop that. Roger is an important part of our backline. He brings a big presence, both physically and as a leader, and the difference he makes for us when he’s on the field is staggering.”

Estevez, 21, was signed to the club from the 2019 CPL #GotGame Open Trials and made 21 appearances in York9’s inaugural season. He also made his international debut during the season, appearing in three matches for Chinese Taipei in their 2022 FIFA World Cup qualification against Australia, Kuwait, & Jordan, playing 90 minutes in the latter two.

Thompson, 27, from Brampton by way of Jamaica, was a veteran authority on the backline. He was key starter in many games that helped lead York9 to finish 3rd in both the Fall Season and Spring/Fall combined standings.

This announcement brings York9’s confirmed returning players up to 12, with a pair of goalkeepers, four defenders, five midfielders, and striker Simon Adjei all re-signed for 2020. They also added two new faces with their CPL-U SPORTS Draft selections.