For most 16-year-olds, much of their downtime consists of surfing the internet, gaming and chilling with friends.

So, on one hand, York9 FC’s recently-acquired forward Lowell Wright conforms neatly to that stereotype.

But dig a little deeper and you’ll find the differences that set him apart.

“In my free time, I’m on the Playstation playing Fifa or on YouTube watching clips or on Netflix watching a football series,” he says.

“I’m always trying to watch the game. I go to the mall with my friends but we’re usually talking about soccer”.

Given his age, you’d expect Wright’s inspirations within the game to be of the more contemporary variety. But he’s a little unique when it comes to the players he obsesses over. He wasn’t even born when his idol was at his peak.

“My favourite player to watch is Ronaldo – R9 – because I love his pace and how he played,” he says. 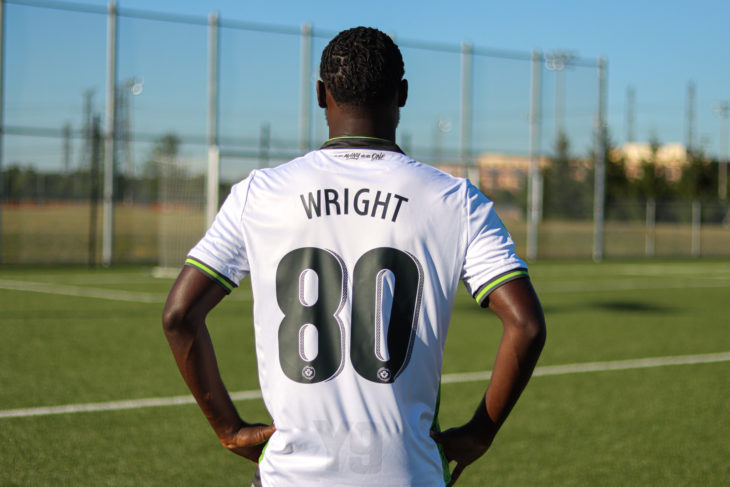 “I’m usually watching a bunch of his old highlights from when he was at Barcelona and even before that when he was at PSV. Other than him, my favourite would be Ronaldinho. That’s why I chose the number 80 on the back of my York9 FC shirt because that’s what he wore at Milan”.

“If you go on my YouTube account, it’s just countless football videos. Whether it’s Ronaldo, Ronaldinho, Messi, Benzema. Any forward player I try and watch. Even if I don’t play like them, I’ll try to just pick up something, have it in my arsenal and see if I can use it in a game once in a while. Like, one of those early moments that caught my eye as a kid was when Mario Balotelli was at Manchester City. It was a game against Norwich and the ball bounced up off the goalkeeper and he just shouldered it into the net. I never saw somebody have the confidence to do that and walk off like it was nothing”.

The love for two retro Brazilian icons stems from Wright’s household where his father, Wayne, and older brother, Xavier, guided his interest.

“My Dad spent countless hours with me on and off the field, he’s really been my coach since I came out of the womb,” Wright says.

“I’m really close with my brother, who played to a really high level. I wanted to spend time with him so I knew soccer was the one way I could do that. I’d play Fifa with him, I’d watch games with him. When I was four or five, him and my Dad made a bet. It was, ‘He’s gonna be better than you’. And my brother was like, ‘There’s no way’. Now that I’ve signed a pro deal with York9, he’s like, ‘That’s because of all those Ronaldo videos I let you watch’. I was just mesmerised by Ronaldo. How fast he moved, his crossovers, his strength and I wanted to do that one day”.

For now, he gets to impress in the Canadian Premier League. The youngest player in the York9 squad, some similarly cherubic faces – like Ijah Halley, Julian Altobelli and Isaiah Johnston – are pretty familiar to Wright, owing to his long association with local side Woodbridge Strikers and his time with the Toronto FC academy. Wright is settling in nicely and enjoying every second, even though his age is used against him occasionally – unsurprisingly by the more senior members of the group.

“The guys are always making jokes about my age and I have to pick up all the kit after training,” he says with a laugh.

“But I’m still in awe, knowing I’m officially a pro and part of something so big. Not everybody my age gets to say their a pro footballer. It’s Canada’s new league and I’m actually playing in it. It’s really humbling to know they want me on the team. Every day I wake up and I realise I’m going training with a professional club. I’m just very excited to get started”.

Wright turns 17 later this month, while he and his team-mates are in Prince Edward Island and chasing glory in The Island Games. Maybe there’ll be a game that evening. Maybe he’ll score a goal or two.

He takes a second to dwell on the thought.

“If that ever happened, it would be the best birthday of my life.”