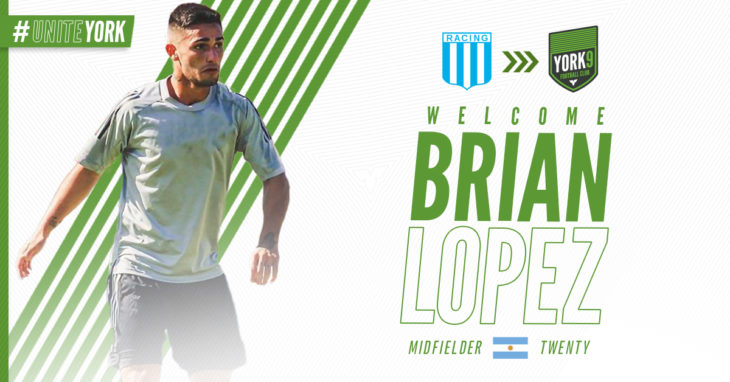 Toronto, ON (March 5, 2020) – Brian López has become the seventh and final international signing for York9 FC during the off season after agreeing to join the Nine Stripes from Racing Club in Argentina, subject to work permit approval.

The 20-year-old was part of the Cuarta division squad at Racing – the senior age group within the youth system. Nicknamed “The Academy”, the club has an established pathway for players to progress from this age grade to play for the reserves, and then the first team in the Superliga Argentina. However, López has decided to pursue his career development in the Canadian Premier League once he has been granted an international transfer certificate.

Managing consultant Angus McNab explained: “He’s come through one of the best football schools in the world with Racing Club, and while he is a young player, we’re delighted to have secured him on an agreement that gives the club the option to keep him through to the end of 2022.

“The opportunity came to my attention during a conversation with a good friend of mine, Padraig Smith, who is the EVP and GM at Colorado Rapids. I knew Brian was on trial there in pre-season and had impressed the club both on the field and also off it.  There are a lot of factors that go into roster construction and when we became aware his trial had ended in Colorado, we moved quickly to secure him.  Our due diligence process was supported by very positive reports from both Padraig and Rapids Assistant GM, Fran Taylor.  They are two guys I’ve worked with before and really respect their opinion.”

“We’re excited Brian will be joining us and look forward to benefiting from the competition he will add to the team.  He will challenge for a spot in the midfield and is very eager to join up with the squad.”