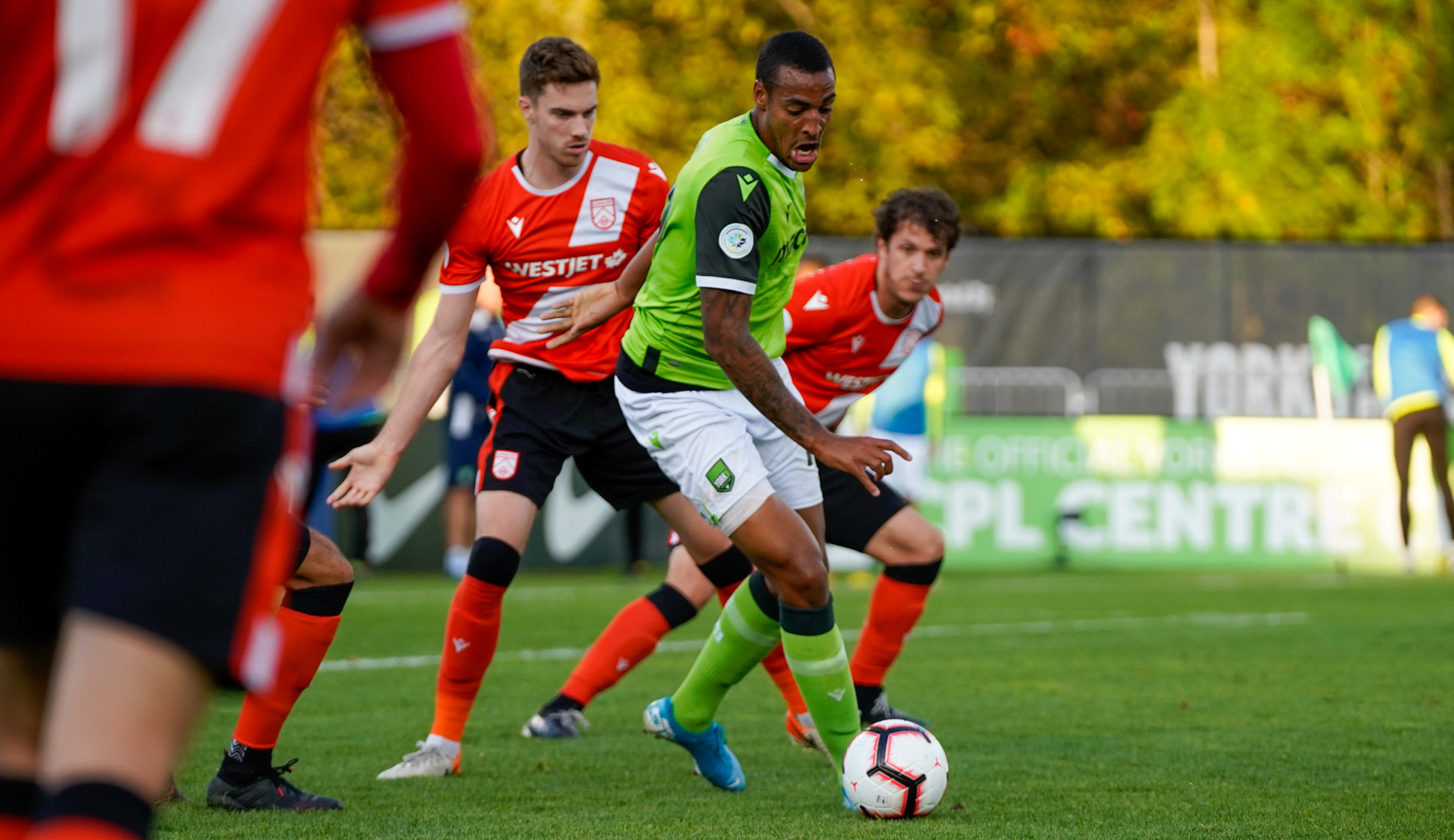 YORK REGION – The action got a little overheated at York Lions Stadium on Saturday night.

York9 FC and Cavalry FC played to a contentious 1-1 draw, a match that saw seven yellow cards and two reds, resulting a sharing of the points and both sides unsatisfied.

“It was emotional, which in a way it’s good to see,” said Y9 coach Jimmy Brennan post-match. “The passion, the emotion, the fans, the players getting into it. The thing is when you’re a player, coaching staff, it’s got to be controlled emotion.

Ryan Telfer, who was booked himself in the 52nd minute for barging into Joel Waterman, as the defender tried to block his path to pressing a goalkeeper clearance, was in the middle of the action more often than not.

It wasn’t the burgeoning rivalry brewing between Ontario and Alberta, nor was it that this was the fifth time the Nine Stripes and Cavs met – this had been a long-time coming, going as far back as CPL pre-season.

“Since the first game that I played Cavalry, I was always on their target list,” Telfer said. “It just happened to be that this was the game where it wasn’t going to work for them.

“The amount of times that players got in my face, wanted to leave a tackle, leave something on me – I didn’t care, I was all up for it – but thankfully the referee saw what they were trying to do and put an end to it.”

The chaos of the final half-hour distracted from what was an enthralling match, scoreless and seemingly deadlocked, though both sides had chances.

“When the game was eleven-vs-eleven, it was quite a good game, a good match,” said Brennan. “It was end-to-end. Our guys, they stuck to game-plan, they were shifting the ball well, we were getting into the right areas. At half-time I asked them to be just a little bit more composed in that final third, in and around the box, rather than rush things.

“We felt our opportunity was going to come.”

Then came the first Cavalry red card, followed quickly by the second.

“People think that when a team goes a man down or two men down, it’s easy to play against,” explained Brennan. “It’s not, it’s even worse sometimes. They’re going to bunker in, have a good shape, make it difficult for us. You’re missing that little bit of experience, that older head in the team that goes, ‘Hey, just relax. We’re going to get our opportunity, let’s open them up, get the ball moving.’

“We lost it a little bit there.”

A golden chance did come in the 80th minute when Morey Doner flung in an early ball from the right and Simon Adjei had found a gap in the Cavalry back-line, but the striker was caught in two minds and couldn’t get the required touch.

“As soon as we missed it, I looked at our bench and said, ‘That was our chance,'” recalled Brennan. “Simon saw it a bit late, misread it and couldn’t get on the end of it. It was a good opportunity, he was in the right spot, but just couldn’t capitalize on it.

“And then they go down the other way, you know it was going to come.”

With Cavalry down to nine men, Nico Pasquotti stuck in the 82nd minute, picking out his corner after York could not quell a meandering move.

Wataru Murofushi, who tested Marco Carducci earlier in the night, would find the equalizer come the 96th minute, offering some consolation for his side being eliminated from post-season contention.

“He put in a good shift tonight, he always does,” said Brennan. “Wata does the dirty work behind the scenes. He’s a clever player, if you watch him closely, he finds great little spaces, good little pockets, he’s got good movement, balance, which I like in a midfielder. He deserved that.

“He saw the build-up, made a good run into the back-stick, I’m happy for the little man to get his goal.”

With four matches left on the campaign and their route to the finals cut, there was a lament for what could have been from Brennan: “We’re still third in the table, we’d liked to have picked up a win tonight, those two games against Hamilton would have been great – could have pulled them back in.

York will meet Forge FC twice in the coming weeks.

“We’re definitely looking to win those next few games, especially against Hamilton.”