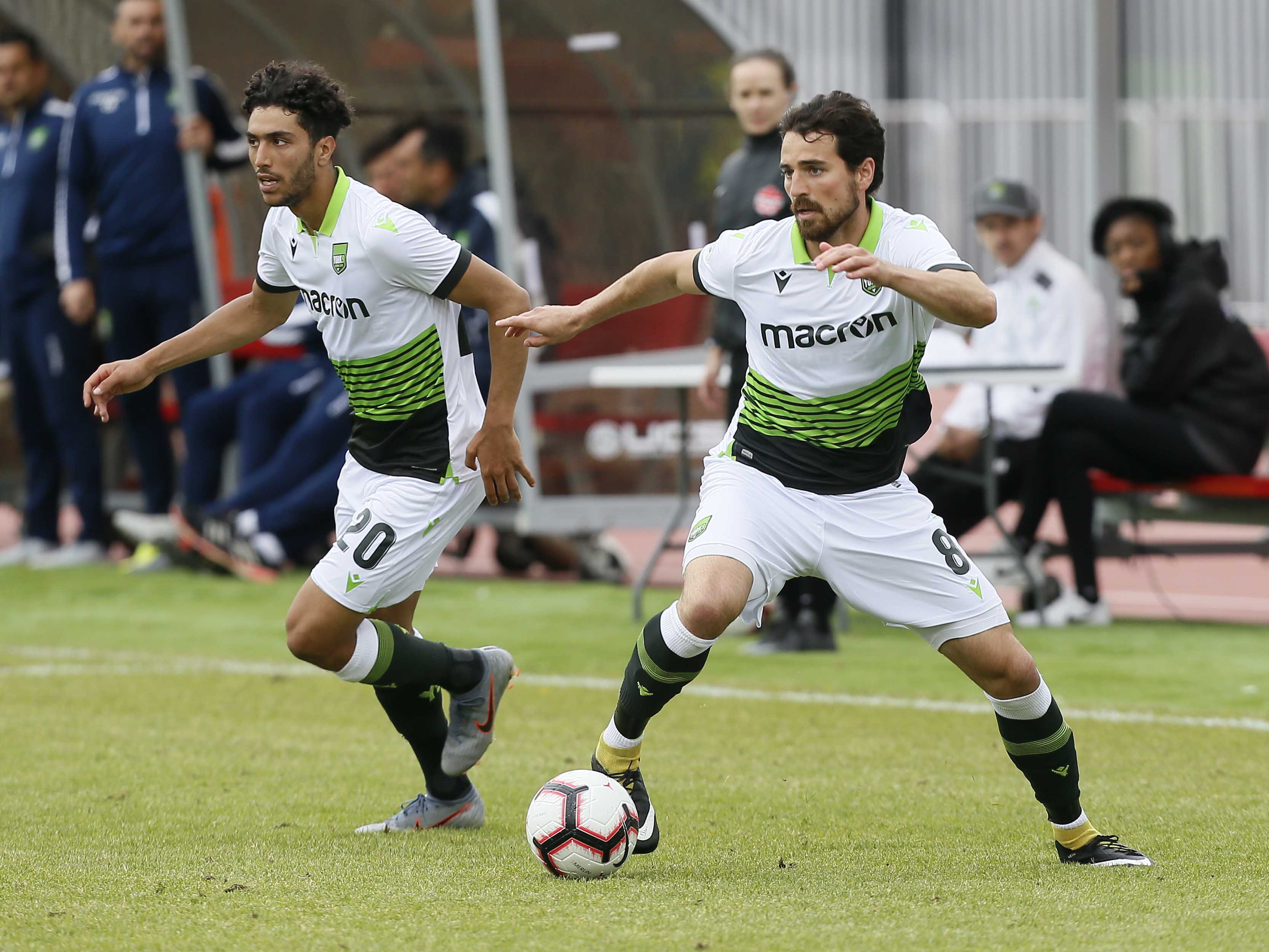 YORK REGION – Where other teams stroll up to a match wearing branded track suits and runners, York9 FC come in style.

The entire team was outfitted with tailored three-piece suits, bright green ties, and pocket squares at the beginning of the Canadian Premier League season.

“It was to let the players know this is your work, this is your job,” coach Jimmy Brennan explained. “If you’re in an office, you dress sharp and we’re no different. The game is the stage where you perform and to show up to that stage you look the part. We all come in with suits – and look good.”

That theme surfaced time and again.

“It shows that we are professional,” defender Luca Gasparotto offered. “One of the words we describe ourselves with is ‘unity.’ We all come in looking the same.”

Professionalism is one of the characteristics that Brennan is looking to instill in the fledgling club.

“Our job is to teach them what it means to be a professional footballer,” the former Canadian international stated. “I’ve been fortunate enough that I’ve gained that experience through other people, got to play at the professional level, so my job as a coach is to pass that knowledge on and explain to them this is what it takes, this is how you handle yourself on and off the field.”

Comprised of players from a variety of backgrounds, representing a vast region of nine communities, the team itself embodies that very notion.

“We are all from a lot of places, but at the end of the day we’re all Canadian,” Y9 captain Manny Aparicio said.

“We grew up playing for these clubs: for Vaughan, for Woodbridge, for Unionville. To be able to represent this area is what really drives this team.”

Unity as a strength was another of the threads.

The schedule gods, however, conspired to keep York9 away from that power source, as the team opened the season with three straight road games, including the inaugural match at Tim Hortons Field against Forge FC, where they earned a 1-1 draw with Ryan Telfer scoring the goal in CPL history. A loss away to Cavalry FC and a draw away to Pacific FC followed.

Add in the away leg of their Canadian Championship series against AS Blainville and York were winless through their first four outings.

“Straight off the bat you’ve got to get used to the travelling,” Aparicio began. “Training here at home, then travelling to Calgary, Hamilton, wherever. A lot of us have been around, but a lot of our team is new to the professional environment, so that’s something they had to learn, how to take care of themselves off the field.

“That was a tough spell, a few draws, a few losses, but that translated into what we are now. … We knew what it felt like to struggle.”

It was in that Canadian Championship opening series against Blainville where a switch flipped.

“People underestimated what they were going to come and do,” Aparicio recalled. “They were a very good side, showed we have to beat them, show why we’re the professional team. We went and did that.”

York took a 0-0 from the away leg and Telfer, displaying his knack for the big occasion, found the needed breakthrough late in the return match – just the team’s fifth goal in as many games.

“We couldn’t put the ball in the back of the net – that’s where we struggled,” Aparicio explained. “That’s when our chemistry came in, against Blainville. We started seeing we’re a good footballing side, when we bought into Jimmy’s mythology, started keeping the ball around any team.”

Provincial rivals Forge and the weather would spoil their home opener a few days later with York falling 2-0, but another hard-earned road point with a 1-1 draw at HFX Wanderers FC to close the month was followed by an offensive explosion – three goals from set-pieces in the first leg of their cup series against FC Edmonton – heralded a turn.

Though they lost the second leg 1-0 in Edmonton, York advanced 3-2 on aggregate and picked up a 1-0 win, their first in league play, against Pacific FC – courtesy of a Ryan McCurdy own-goal – back home to kickoff June.

More scoreless draws followed at home against Edmonton and HFX, as well as a 2-0 home loss to eventual Spring Competition winners Calvary. But the saw the Nine Stripes come into their own with a 3-1 away win over Valour FC.

It wasn’t just the goals, but the way they came, the way the side accomplished what they set out to do.

“Finished out that season strong, that was our plan: to go into that game, end on a good note and start the Fall season fresh,” said Aparicio, who bagged the second. “We score those three goals – great from Maury (Doner), free-kick goal, a little bit of a deflection, and a 90th minute goal (from Simon Adjei), probably the sweetest you can get as a team.

“We haven’t looked back. We know what we’re capable of, we’ll go up to anyone.”

It was a case of efforts being rewarded, and through it all, Brennan’s philosophy was coming into light.

“It took us a while to understand who we were as a team, the way that we wanted to play,” Brennan said. “At the beginning of the season, we could never really get settled and we found it difficult, grinding out draws, doing whatever we could to get a result.

“We’ve settled down now, we’ve got our home, got our training pitch, we’ve got wins under our belt and every game we’re growing in confidence. We’ve improving every single week.”

A 1-0 loss away to HFX officially kicked off the Fall competition, but a run of two straight 2-1 home wins over Edmonton and Pacific, as well as another defeat at the hands of Cavalry, this time 1-0 away, saw York shoot up the table.

And going toe-to-toe with the Montreal Impact in the third round of cup action, self-proclaimed as the biggest match in the club’s young history, only buoyed them further.

Having fallen behind on an errant back-pass, Y9 stormed ahead with two goals in the waning moments of the first leg, only for a stoppage-time penalty to spare the visiting Impact’s blushes.

In the second leg, they had plenty of chances to score a valuable away goal in the opening moments, but another penalty sealed their fate, and York bowed out of the Voyageurs Cup at the feet of the Impact, losing 3-2 on aggregate.

“This fall season has been a lot kinder to us,” Brennan said. “With the cup games against Montreal, the players really understood we can compete – against MLS teams and teams in this league.

“It really helped with our confidence.”

That was evident in their next CPL match, closing July with a 6-2 dismantling of HFX to thrust themselves into the contender’s group atop the standings.

Another facet of that professional mindset has been somewhat unique at York.

Where other teams look to rotation to manage the ferocity of the schedule, Brennan takes a different approach: once you earn the shirt, you keep it.

“If you’re doing a job, you stay in. Push yourself, you’ve really got to test yourself,” Brennan said. “It’s not amateur football where you can come in one week, play a game and not show up the next week. This is your job now. You get your position, you hold it down for as long as can because there is going to be someone knocking on your door that wants your job.

“I want our guys to play 30-40 games in a season. To be a hardened professional, you have to play that number of games, week in, week out, every single year.”

A trio of losses followed a two-week break, including a pair of 2-0 home defeats against Valour and Pacific, and, most recently, yet another to Cavalry, this time 3-1 at Spruce Meadows, but emerging undaunted from such setbacks is part of what it means to be a professional.

“We’ve come a long way,” reflected Gasparotto of the club’s journey. “We’re a very tight-knit group, play for each other, work hard for each other. We created that bond and our football speaks for itself: the way we play, the trust we have in each other on the ball, the movement off the ball to help our teammates.