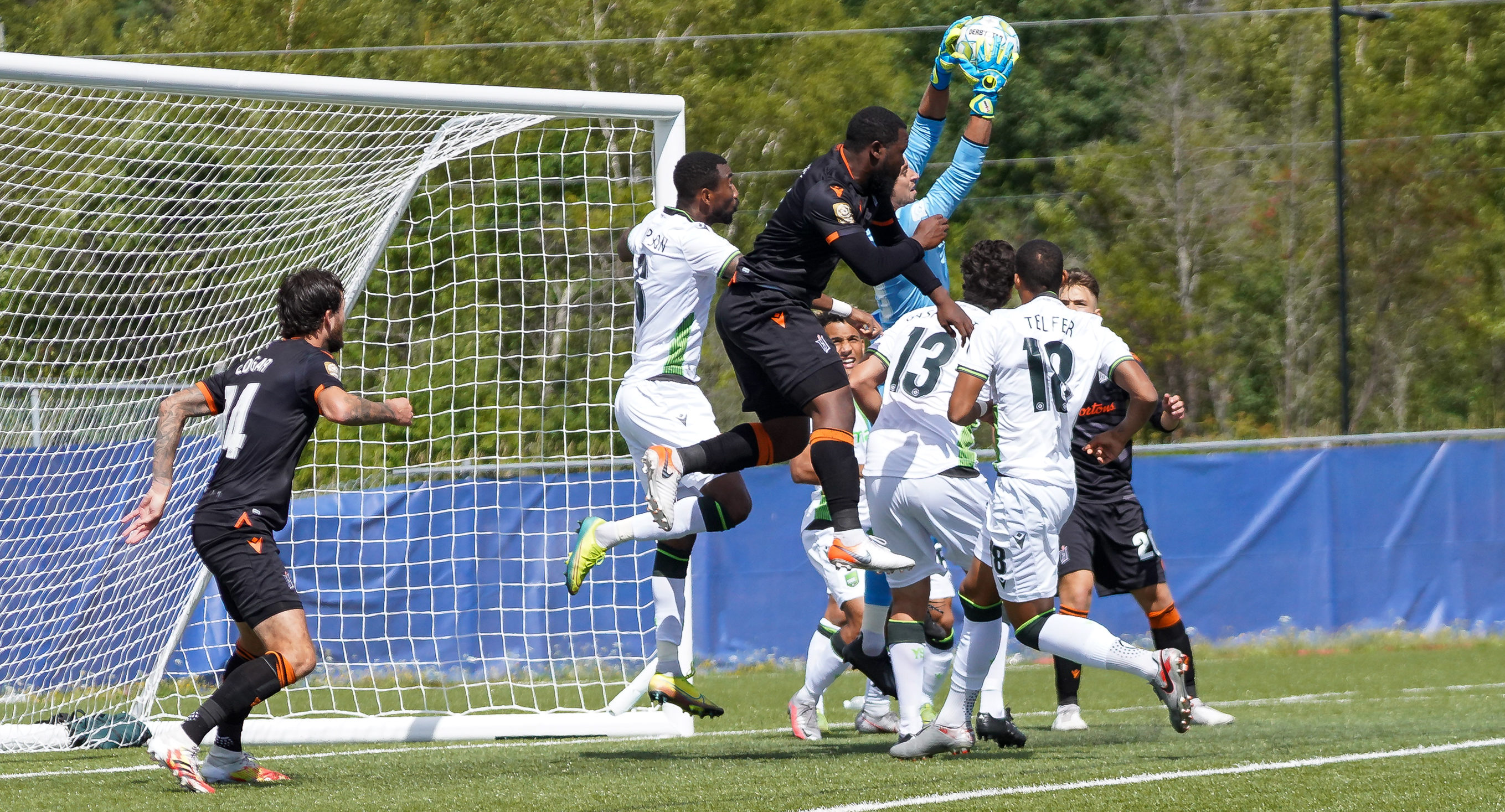 The 2020 CPL season has been turned on its head.

In what has to be considered as the best matches of The Island Games so far, York9 FC took the spoils in the 905 Derby on Wednesday afternoon with a fiery 3-2 win over Forge FC.

With the victory, York9 shot up the CPL table into third place (for now), with six points putting them ahead of Pacific FC by one — and just two back of Forge in second.

All it takes is a few moments, and York9 took theirs in this one. After the first 20 minutes of the match left no daylight between the two clubs, the Nine Stripes leapt out to a sudden lead with a pair of set-pieces.

First, it was Manny Aparicio standing over a free kick on the edge of the box in the 27th minute. His effort hit the left post, rolling directly into the path of Kyle Porter who scored on the rebound. Just seven minutes later, Porter hit a corner kick low to the near post, which Joseph Di Chiara managed to flick into the goal over ‘keeper Triston Henry.

The CPL champions wouldn’t go down that easily, though. Forge coach Bobby Smyrniotis made a trio of bold substitutions at halftime, bringing on Chris Nanco, Anthony Novak, and Maxim Tissot (and sacrificing captain Kyle Bekker in the process).

The move paid off immediately, as Nanco managed to get around the York9 backline by passing to himself and finished well off the turf to make it 2-1. Alex Achinioti-Jonsson scored the equalizer in the 52nd minute, seizing on a rebound in the box after a free kick.

Although, by that point, Forge looked to be on an unstoppable path to victory, fortune seemed to favour York9 as they continued to win set-piece opportunities in the attacking third. Eight minutes after Forge levelled things, York9 earned a penalty off an Achinioti-Jonsson handball in the box. Di Chiara slotted the spot kick into the bottom left corner for his second of the day, putting his side back in front.

Of course, Forge continued to refuse to go quietly. They sent a fury of attacking moves at the York9 box in the late second half, with several threatening chances ultimately cleared by excellent last-ditch defending.

York9 FC: Create chances for Alvaro Rivero – The Spaniard wasn’t particularly involved in his hour of work, touching the ball just once inside the 18-yard box. York9 eventually found their chances in the game, but they didn’t quite incorporate Rivero as much as they’d like as the striker dropped fairly deep into midfield.

Test Forge’s Monti Mohsen – The Nine Stripes did this fairly well, although their first-half attack was a little lopsided to the left side rather than the flank where they could’ve attacked Mohsen. The youngster held his own going forward, making two key passes and plenty of shots, but he was subbed off at half for Maxim Tissot.

Forge FC: Maintain possession, frustrate York9 – Forge actually did hold onto possession for the most part, hovering around 55 per cent for the majority of the game. They made use of it in one burst after halftime, but aside from that period, the Nine Stripes certainly didn’t look frustrated. They took their chances when they arrived.

Keep your heads – As any good derby should be, this contest had plenty of hard challenges, and more than a few fouls. Forge did get a little drawn out on set-pieces that York9 scored from in the first half, but they were generally fairly composed, showing good resilience to get back into the game.

It’s not every day a player scores twice from set-pieces. Di Chiara’s movement on his first goal (York9’s second) was excellent to get in front of the goalkeeper and find the net. He also led his team in touches (56) and duels won (11), and he had a sparkling 97.4 per cent passing accuracy with 38 attempts.