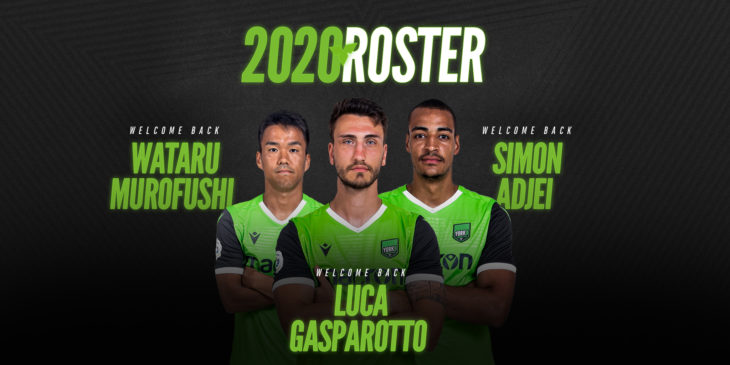 “We’re extremely pleased to have this trio return for 2020. Simon really came into his own in the back half of last season, and we believe he can carry that into next year,” according to York9 FC Head Coach, Jimmy Brennan.  “Wataru is an incredibly technically gifted player, and he’ll continue to be such an important part of our midfield setup. Luca was obviously a key part of our defence having played every match, as well a leader on the field as vice-captain.”

The Swedish Adjei, 26, was the club’s first ever international signing, and had a history with Manager Jimmy Brennan having played with him at Aurora FC in League1 Ontario in 2016. Adjei scored 8 goals in the club’s inaugural campaign, including 5 in the final 8 matches to help lift York9 to a 3rd place overall and fall season finish.

Wataru Murofushi, 23, from Aichi, Japan, joined York9 FC after leading Albirex Niigata of the Singapore Premier League to a domestic treble and taking home 2018 Player of the Year honours. He made 29 appearances in York9’s 2019 campaign and was key piece linking the defence and attack together, as well as scoring 3 goals himself.

Gasparotto, 24, from Ajax, Ont. was also a key piece of York9’s first season, becoming the league’s only “Ironman”, playing every single minute of the club’s 28 league matches and 6 Canadian Championship matches. His consistent play anchoring York9’s backline helped the club achieve a 3rd place finish in both the Fall Season and Spring/Fall combined standings.