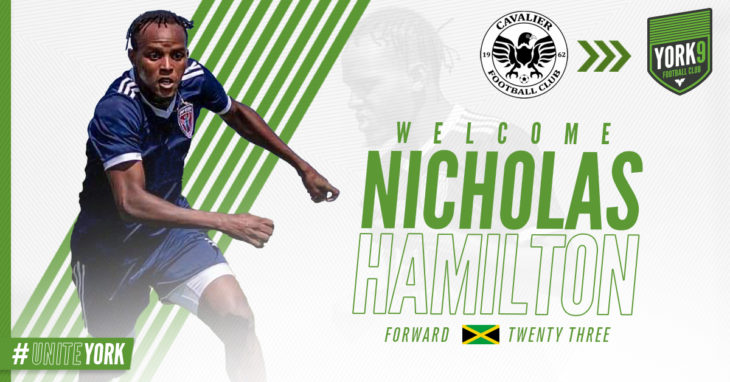 The 23-year-old – who can play as a central striker or winger – joins from Cavalier Soccer Club, where he netted 10 times last term as Cavalier finished fourth in the Red Stripe Premier League regular season, before securing third place overall in the playoffs.

Hamilton is the second Cavalier player to make the move to the CPL this year after teammate Alex Marshall signed for HFX Wanderers at the end of January.

Yet to be capped by the Reggae Boyz, Hamilton attended a 20-man training camp with the national team for domestic players this time last year, and he will aim to move up the national team pecking order by making an impact with the Nine Stripes.

His last appearance for the Kingston-based side was in a 1-0 win over Harbour View on January 26, and he will hook up with the squad as soon as he is granted an international transfer certificate.

Head coach Jimmy Brennan said: “Nicholas is going to bring us a great deal of energy up top. He is a player who wants to take players on, in or around the box.

“Great going forward and clinical in the final third area; he will give us some good pace to get in behind teams. Nicholas is a talented young player who has been called up by the national team [for a camp], which shows you the type of quality he has as an individual.

“He’s going to give us a different dimension in our attacking phase and we’re looking forward to working with him.”