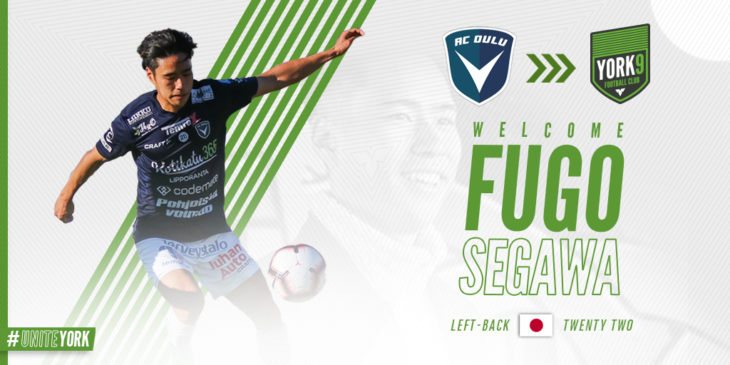 Toronto, ON (February 10, 2020) – York9 FC is pleased to announce the signing of Japanese left-back Fugo Segawa from AC Oulu.

The 22-year-old joins the Nine Stripes after spending three and a half years in Scandinavia, first with Ånge IF in Sweden, and then with three Finnish teams – PEPO Lappeenranta, Rovaniemen Palloseura and AC Oulu.

After graduating from a private football academy in England, he signed for Mar Menor FC in Spain at the age of 18. In 2016 he then made the switch to first Sweden and six months later to Finland and has made nearly 60 appearances in the last three seasons, 24 of them coming last year for Oulu in the Ykkönen – the second tier of Finnish football – and the Finnish Cup.

Head coach Jimmy Brennan said: “Fugo loves to get forward; he’s got a great left foot and bags of energy.

“He gives us another option on the left-hand side. Diyaeddine Abzi cemented that position last season, he was good going forward and defensively, he’s improved an awful lot, but we need players to come in and fight for positions, and this is going to get the best out of Abzi and Fugo.

“Fugo is a very good player. He’s travelled and he’s cultured – so we’re confident he’ll be able to settle in Toronto and do well for York9.”