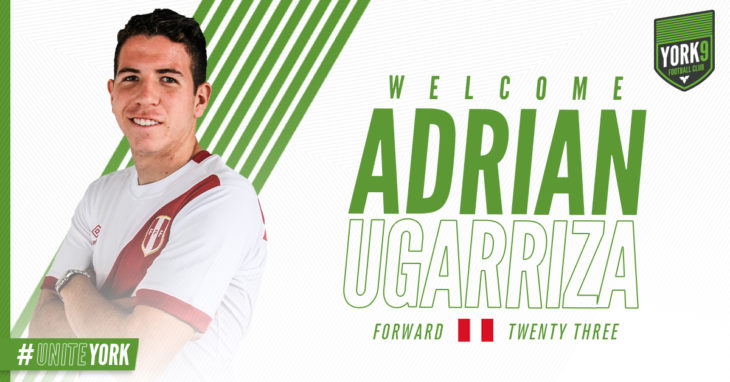 Toronto, ON (February 24, 2020) – York9 FC has swooped in to snap up Peruvian forward Adrián Ugarriza, subject to being granted an international transfer certificate and work permit.

The six-foot striker has represented Peru at the U-17 and U-20 level and appeared 13 times last season as Alianza Lima finished as runners-up in Liga 1 after being defeated 4-3 over two legs by Binacional.

He started out at Lima, Peru’s, Club Deportivo Universidad San Martín de Porres notSan Martín University, where he was part of the squad that finished runners-up in the Copa Inca in 2014, after they suffered defeat on penalties to his most recent employers, Alianza Lima, following a 3-3 draw after extra-time.

“Adrian’s signing is another important milestone as we assemble the 2020 roster. He is a player who immediately caught our eye when we looked at him. (Head Coach) Jimmy Brennan used his network of contacts and got more positive feedback so it was an easy decision.” said Managing Consultant Angus McNab. “We have a multi-year option on his contract and he is another player where we benefited from the league’s support with their international program, supported by initial analysis to aid talent identification from 21st Club.”